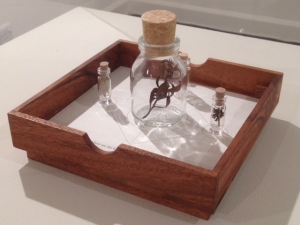 ‘Memorious Earth: A Longitudinal Study’, an exhibition by Autumn Richardson and Richard Skelton, is the latest in an extensive artistic and poetic exploration of our landscape. Experiencing the exhibition, I felt it reminiscent of Richard Long’s Ten Days Walking and Sleeping on Natural Ground (1986), where Long presents the spectator with a series of three prints: the title; the list of places he visits; and a circle of ideas, thoughts and experiences from the journey. There are also strong connections with David Tremlett’s The Spring Recordings (1972) where he visits each county in Britain and records sounds from the area.

Richardson and Skelton’s exploration of Cumbria’s Duddon Valley builds on Long and Tremlett’s work, feeding deeply into Tremlett’s idea that ‘your field, or your hill, or your landscape is your studio’. The exhibition incorporates poetry, literature, maps, samples of vegetation, water and soil, alongside pieces of music composed by Skelton.

One of the most fascinating pieces in the exhibition is Relics (2013), thirteen prints representing the arboreal history of the valley. Much of the ancient woodland this piece is depicting no longer exists and is described as ‘ghost-presences’, remaining in the landscape only through the names of topographical features; Birker Fell, for instance, and Withy Bottom, hints of birch and willow wooded lands. Each print has been presented in a circular format in the style of growth rings of a tree. In the centre the most ancient name, with the current name the outermost ring. I was surprised at the oak being the smallest set of rings, perhaps this is to do with its archetypal nature, once named it remained strong in the consciousness of many tribes of people. The shortness of its name didn’t appear to be the explanation as ash was one of the largest prints with a good number of rings and changes of name.

Another part of the exhibition, ‘Feræ Naturæ’, explores animal veneration and persecution. Using tools borrowed from Lakeland Arts collection at The Museum of Lakeland Life and Industry, Skelton arranges them to replicate horned deities and suggests ways in which they may have been worshipped. Incorporating the myths and legends of ancient belief systems, Skelton mixes these with possibilities that he has suggested himself to curate a ‘museum’ that is both intriguing and inventive.

Overall this is a fascinating and educational exploration of the Duddon Valley, tying together a variety of strands that make up the history, landscape and sense of place of an area. The exhibition runs from 16 January to 14 March 2015 at Abbot Hall, Kendal and Blackwell Arts and Crafts House, Bowness.

This entry was posted in exhibition, review. Bookmark the permalink.