The Woods farming family of Haslingden

Many of the tenanted small farms surrounding the township of Haslingden throughout the nineteenth century began as smallholdings for handloom weavers, with a home, parcel of land and a weaving shop attached to the dwelling. As power loom weaving began to dominate, by the 1840s most of these farm properties had lost their connection to handloom weaving.

Roundhill Farm, Roundhill Road, Haslingden (Roundhill Road was the turnpike road between Haslingden and Blackburn, the building is now a private dwelling): a branch of the Woods farmed here from c.1800-1850. During the nineteenth century, Roundhill was a bustling hamlet with a number of families living and working in the area. William Woods held copyhold land here until his death in 1837. He was also the publican at the nearby Farmer’s Glory public house.

My study investigates the lives of one family, the Woods, who were linked to a handful of these farms on land to the northwest of the town, edging Haslingden Moor. Various members of the Woods family were farm tenants from the seventeenth century to the end of the twentieth century. My research took this family as a case study and used them to illustrate the changing nature of life during the latter half of the nineteenth century, through changes in literacy, mortality, mobility, industry, marriage, fertility, occupations, and the social economy. 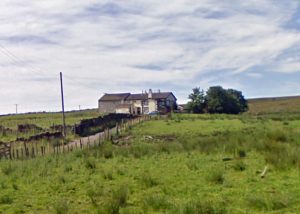 High Cockham Farm on Roundhill Road, home to one branch of the Woods from the 1830s to the 1870s, now a home for young people. Thomas Woods farmed here until his death in 1859, when his widow Mary took over the tenancy. She did not remarry, despite bringing up more than ten children on her ow

Although the Woods may have been handloom weavers in the past, by the time of the beginning of my study in 1837 they were either farm tenants, or working in the local textile mills. By 1881, only two Woods family members farmed in the study area, most of the rest remained mill workers and some had moved further afield to farm elsewhere.

The map shows the location of all small farms in my research area with Woods associations. Sunnyfield and Swineherd Lowe are the sole twentieth-century farms, tenanted at various times by Holden Woods until the 1970s.